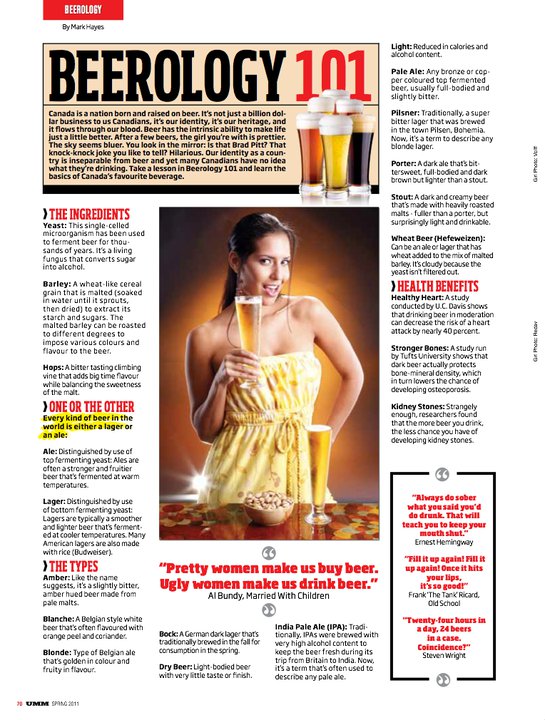 “Always do sober what you said you’d do drunk. That will teach you to keep your mouth shut.” Ernest Hemingway

Canada is a nation born and raised on beer. It’s not just a billion dollar business to us Canadians, it’s our identity, it’s our heritage, and it flows through our blood.

Beer has the intrinsic ability to make life just a little better. After a few beers, the girl you’re with is prettier. The sky seems bluer. You look in the mirror: Is that Brad Pitt? That knock-knock joke you like to tell? Hilarious.

Our identity as a country is inseparable from beer and yet many Canadians have no idea what they’re drinking.

Take a lesson in Beerology 101 and learn the basics of Canada’s favourite beverage:

Every kind of beer in the world is either a lager or an ale:

Ale: Distinguished by use of top fermenting yeast; Ale’s are often a stronger and fruitier beer that’s fermented at warm temperatures.

Lager: Distinguished by use of bottom fermenting yeast; Lager’s are typically a smoother and lighter beer that’s fermented at cooler temperatures. Many American lagers are also made with rice (Budweiser).

Yeast: This single-celled microorganism has been used to ferment beer for thousands of years. It’s a living fungus that converts sugar into alcohol.

Barley: A wheat-like cereal grain that is malted (soaked in water until it sprouts, then dried) to extract its starch and sugars. The malted barley can be roasted to different degrees to impose various colours and flavour to the beer.

Hops: A bitter tasting climbing vine that adds big time flavour while balancing the sweetness of the malt.

Amber: Like the name suggests, it’s a slightly bitter, amber hued beer made from pale malts.

Blonde: Type of Belgian ale that’s golden in colour and fruity in flavour.

Bock: A German dark lager that’s traditionally brewed in the fall for consumption in the spring.

Pilsner: Traditionally, a super bitter lager that was brewed in the town Pilsen, Bohemia.  Now, it’s a term to describe any blonde lager.

Porter: A dark ale that’s bittersweet, full-bodied and dark brown but lighter than a stout.

Stout: A dark and creamy beer that’s made with heavily roasted malts. Fuller than a porter, but surprisingly light and drinkable.

Wheat Beer (Hefeweizen): Can be an ale or lager that has wheat added to the mix of malted barley. It’s cloudy because the yeast isn’t filtered out.